Many of us are perpetually drowning in emails. Perhaps you’d relate to these:

I receive hundreds of emails every day

I spend hours every day reading and replying to emails

I have a hard time finding emails in my inbox

The last thing I do before retiring to bed: check my inbox

Well, you’re not alone. An average employee in the US receives around 180 emails every day. They spend 33% of their time at work reading and writing emails.

It’s about time we get to the bottom of the problem. Is it email itself? Is clutter an unavoidable byproduct of email marketing? Well, it’s not entirely true.

The real problem lies in the way we use email. We forward emails as a way to share information or delegate tasks to a teammate. We Cc teammates irresponsibly—looping in people who don’t need the information.

We decided to dig deeper. We analyzed the email usage of 1000 email accounts that use Hiver—and processed 300,000 email threads and 4.7 million emails.

The insights are startling.

What is Inbox Zero? It’s a rigorous approach to managing emails aimed at keeping the inbox empty—or almost empty—at all times. But, with the number of emails on the rise with every passing day, Inbox Zero looks more elusive than ever.

An average professional receives close to 180 emails every day. And the situation is only becoming worse with every passing year. Between 2017 and 2018 alone, the daily email influx went up by an astonishing 13%.

What’s worse: People don’t even open 40% of the emails they receive. We’re talking about the Primary section in Gmail. Not Social. Not Promotions.

The reply rate is pretty dismal as well.

2. Irresponsible Cc’ing is the norm

Remember the times when you wondered why you were Cc’d on an email (that had nothing to do with you)?

8% of emails people receive are those that they’ve been Cc’d on. Cc overuse is ingrained in the culture of most companies. People Cc others to keep them in the loop. And then there are occasions when they want their bosses/managers to see if they agree with the course of action.

Do we really need those emails eating up our mind space? Of the emails people are Cc’d on: they open 84% of them, but reply to only 19%. 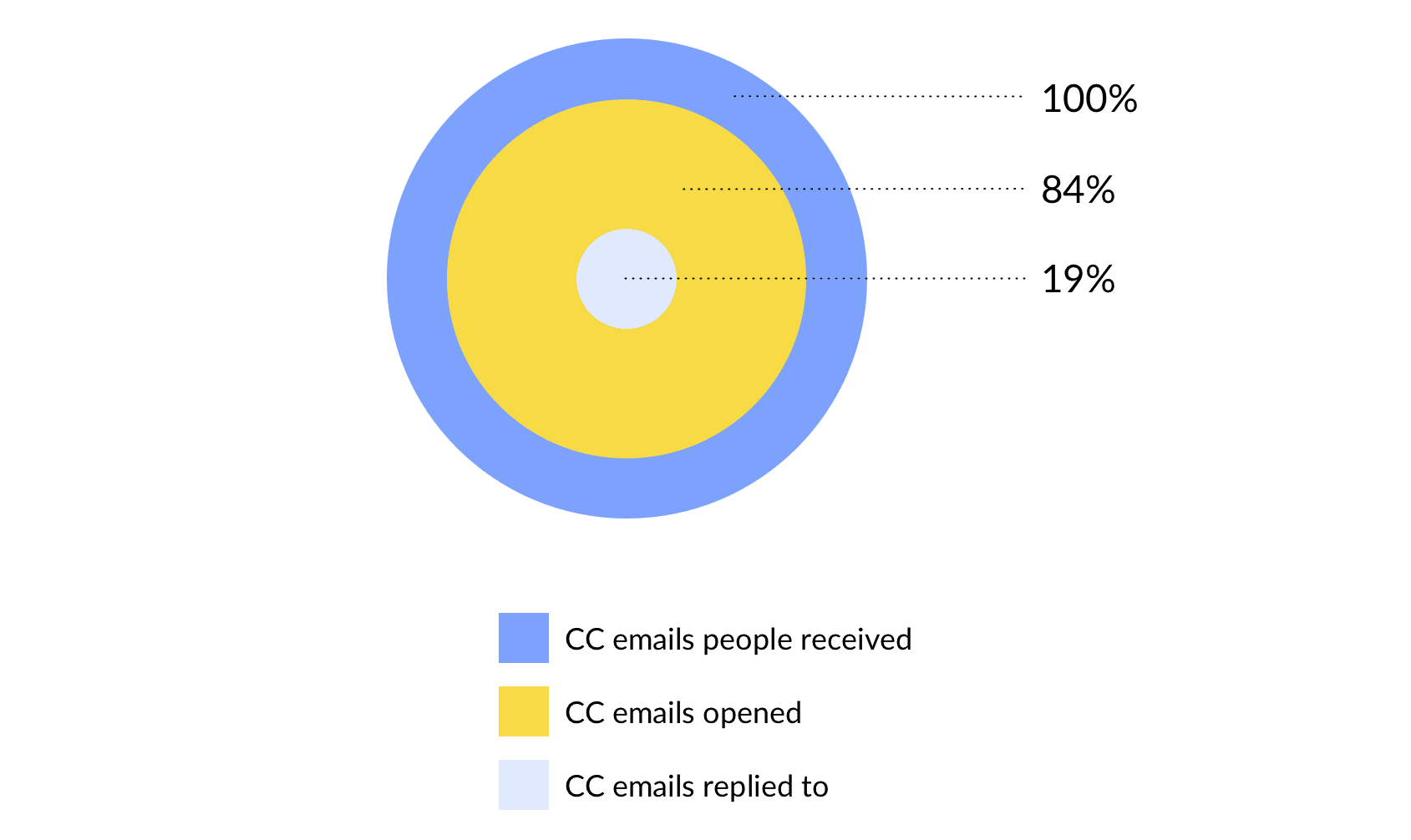 It’s a telltale sign that we did not need to be Cc’d in all those emails in the first place.

3. Forwarded emails are a menace

Remember receiving a complicated thread with a ‘see below’ or an ‘FYI’?

A staggering 13% of the emails we receive are forwarded to us. But why all the forwarding? Because there is no other way to share information using Email. And we cannot always take things to chat applications. They just don’t fit the bill for a lot of situations.

People resort to forwarding when they have to delegate an email to someone, or for making company-wide announcements. In hindsight, it’s all adding to the inbox clutter problem.

Of the emails forwarded to people: they open 70% of them but reply to only 20%. 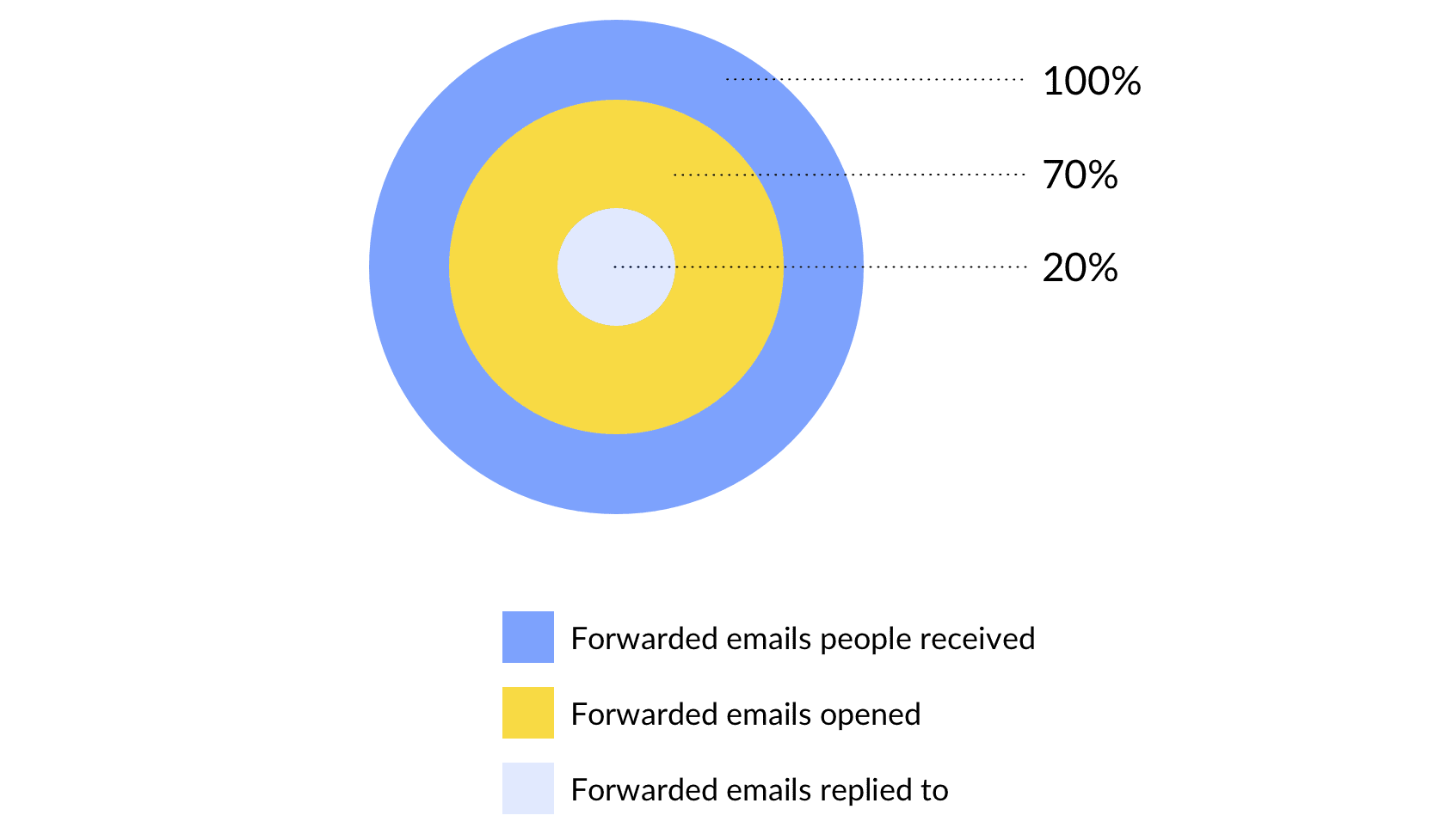 When we don’t engage with emails, it’s clear that we could have easily done without them. But we are still forced to spend time sifting and deciding what to do with them.

4. Email groups get messy (if not handled well)

51% of emails people receive are group emails (sent to a shared inbox or a distribution list). The real problem is that every employee who is a part of that group receives a copy of each email that arrives—in their Primary inbox. 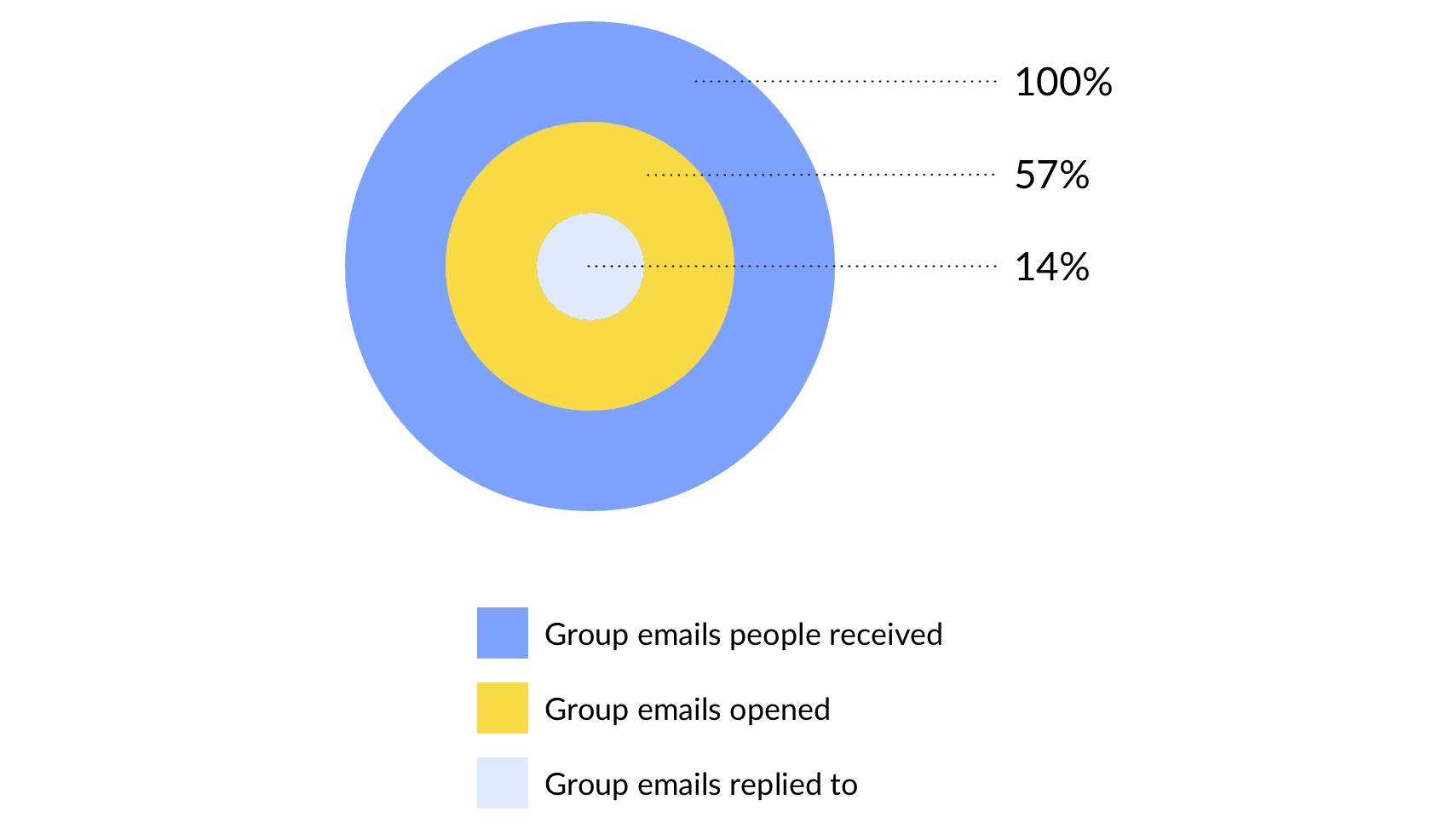 If we’re not even opening 43% of such emails, they were probably meant for someone else in that group.

We definitely need a better way to deal with group emails. If nothing, we have to at least keep them from reaching our Primary inbox.

This goal of this study was to help people form a clear picture of what type of emails take up their time—so that they know where to start the cleaning work.

For more insights on email behavior at work, you can always download your copy here.

Author
Harsh Vardhan
Harsh is the content lead at Hiver. He's jocular, loves dogs, and is always up for a road trip. He also reads - when Netflix gets boring.
Want us to send you awesome content?
Subscribe
Related articles
How to Write Effective Apology Emails to Customers
Gmail Filters 101: Your Definitive Guide To Gmail Filters
17 Email Phrases To Help You Get The Desired Response
Popular posts
10 Factors Google Workspace Users Must Consider While Looking for a Helpdesk
How to Organize Your Gmail Inbox in 15 Minutes: Seventeen Secrets
Google Collaborative Inbox: 7 Reasons You Should Not Use It + Alternatives
Write Awesome Customer Service Emails: Best Practices + Templates
Subscribe